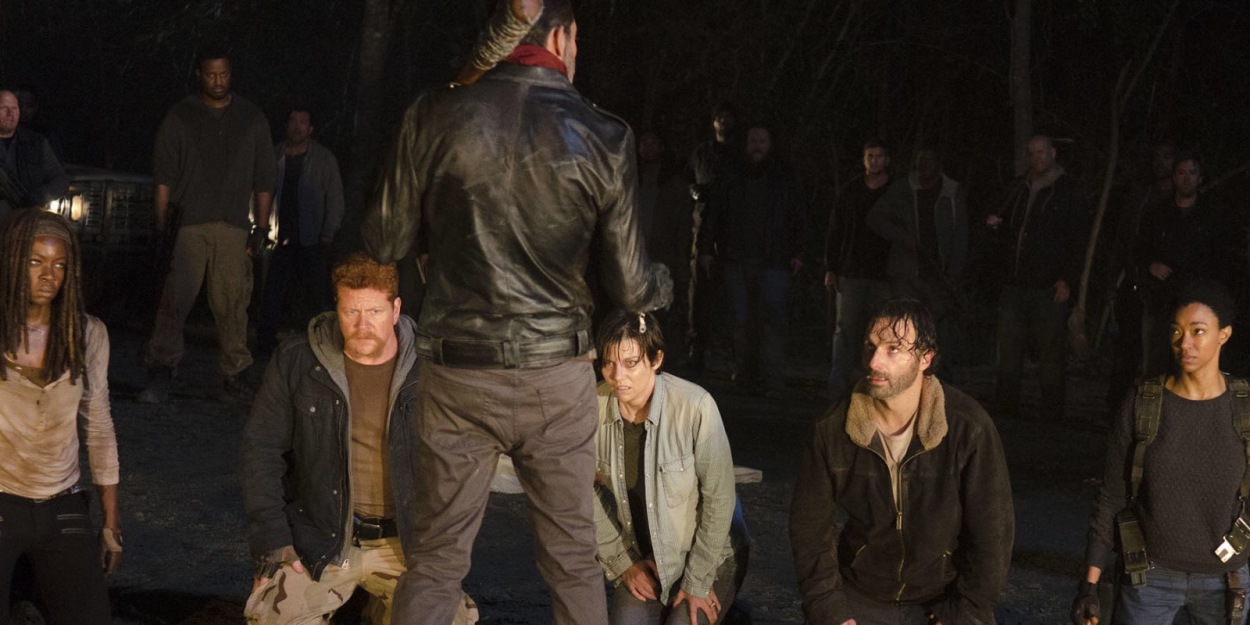 It’s baa-aaaaack! The show that keeps coming back from the dead like a zombie itself, the show that keeps raising the apocalypse bar higher and higher, and, oh, the show that promised us a major character death in the Season 6 finale yet somehow managed to get away without telling us who that character actually was – “The Walking Dead.” For those of you who watch “The Walking Dead,” the Season 7 premiere is probably going to be one of the most insane, twisted, BEST episodes in the show’s history. A main character has been killed off but we still don’t know who that main character is. Before you read any further, I’m going to let you know right now: whereas I don’t know who got killed off, even my just guessing and bringing up some names may contain spoilers, so SPOILER ALERT if you aren’t yet caught up…

Alright, now that we got that out of the way, let’s quickly break this bad boy down. I’m just going to come right out and say it: Glenn’s donezo. With the Season 7 teaser that got released, we already know that Rick didn’t get the axe. But let’s be honest here. Whose storyline is kind of played out at this point? We love Glenn, we love his character, and we definitely don’t “want” him to get killed off, but is there really any further character development left for him? There’s not a whole lot more that can be done with him – unless he went totally mad and bezerk or something, but that’s just not Glenn. He is who he is and that’s that. There’s only so many “close calls” or zombie survival moments you can have from this point on with Glenn until viewers get bored with him and then end up not feeling bad at all when he eventually does get mauled by a walker or something. Also, we already got teased with Glenn’s death earlier last season and, although it was a lot sadder than I thought it would be (even though he didn’t actually die), I think the majority of us kind of just accepted Glenn’s “death.” It didn’t mean a WHOLE heck of a lot then and it won’t mean a WHOLE heck of a lot in the future. The iron is, however, very hot right now and it is time for “The Walking Dead” to strike that iron. What better way to make us miss Glenn the most than by taking him out of the picture when he’s actually needed the most? Maggie is prego with Glenn’s child. If there’s any time to kill Glenn off – and make his death mean the absolute most that it can (while making us feel horrible about it) – that time is now. I know a lot of people are saying Daryl got the boot, but that can’t be true because of the simple fact that 99.4% of the show’s viewers would stop watching – myself fully included. Listen, I’m not opposed to killing off Daryl – you gotta do what you gotta do – but you don’t go and kill of Daryl in such a pathetic way. Daryl is a badass. If Daryl ever gets killed off, he needs to get killed off in a TOTALLY badass way. Getting beaten to a pulp by Negan’s “Lucille” is NOT the way for Daryl to go. Nothing against Glenn’s possible kiss of death with Lucille – I’m just saying. In the end, however, only time will tell. On Sunday night, October 23rd, “The Walking Dead”s next victim will be revealed and Rick will be on the hunt for his next “right hand man.”

Let us know in the comments who you think Lucille will end up locking lips with!