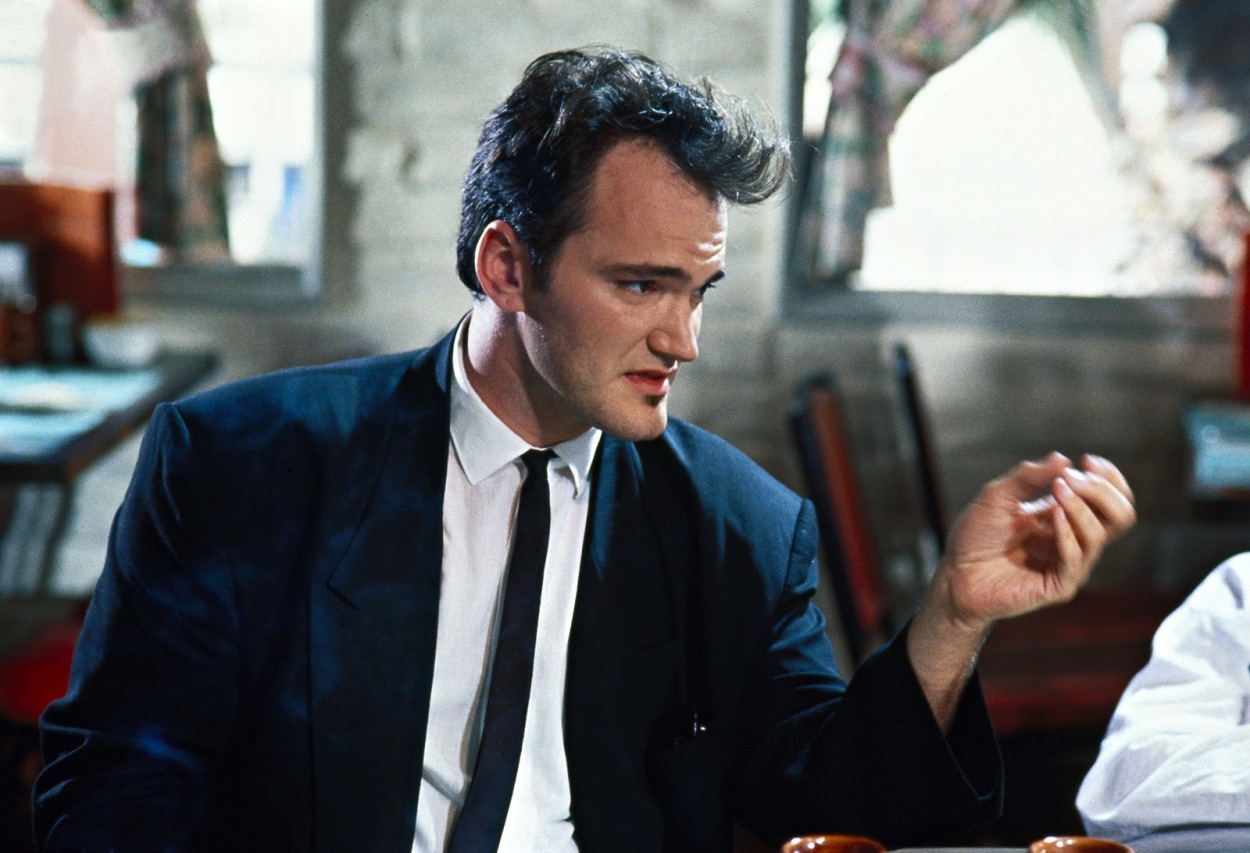 (Warning: Some Big Spoilers For Those Who Haven’t Seen Many Tarantino Movies)

Tarantino holds a special place in my heart. The first Tarantino movie I ever watched was Kill Bill Vol. 1. I rented it on dvd at Easy Video when I was absolutely not old enough to watch Kill Bill. My mother asked the cashier guy at the video store if it was okay for me to watch and he said, “yeah I think so,” and the rest is history. God bless you lazy Easy Video cashier guy.

Quentin Tarantino is one of the most iconic filmmakers in history which you undoubtedly already know. Tarantino’s probably going to go down as one of the best filmmakers of all time and love him or hate him you can’t deny he has an immensely cool style. It’s a shame that he said he will only direct ten movies which means he’s only got two left. The world will certainly be a different place without Tarantino’s bizarre input. Everyone likes at least one Tarantino movie, and every single one of his movies is arguably a masterpiece (yes even Death Proof). What makes Tarantino an amazing filmmaker is his overwhelming film knowledge and love for movies, oh… and of course the fact that he’s absolutely crazy. Don’t believe me? Look up his Django Unchained BET cast interview on youtube or frankly any Tarantino interview. But who cares? I welcome his craziness with open arms if it helps him make amazing movies for the world to see, which he’s been doing for over twenty years. Movies where you laugh, where you cheer, and where you say… what the fuck? So here are our Top 6 Tarantino Movie Deaths That Made You Say WTF…

6. Stuntman Mike (Kurt Russell) – Death Proof: The scene where he tragically, comically, and horrifically obliterates a car full of lovely ladies was “what the fuck” enough, but the short little shot where Rosario Dawson cowboy boots Kurt Russell in the throat kind of out of nowhere was a great little cherry on top of the absolutely kooky ride that was Death Proof. Plus damn Rosario, huge difference from her character in the Marvel Netflix shows… actually she’d probably do that too.

5. Boss Matsumoto – Kill Bill Vol. 1: A totally messed up scene in a totally messed up and kick ass movie, and on top of that it’s an animated scene, via Japanese anime style, in the middle of a live action movie, that completely fits and adds to the stylistic masterpiece that is Kill Bill. The whole premise is WTF. Yakuza dude is a pedophile, sword to the gut, teeth shooting everywhere, little animated assassin Lucy Liu kills like seven (I think three) guys. What the fuck Quentin?

4. Hitler – Inglorious Basterds: Who doesn’t want to see Hitler get the crap shot out of his face. Tarantino was kind enough to give the world that scene, which completely surprised me in the theater when I saw the movie because all my history classes said it happened differently but, I do know that Eli Roth was in Germany in the 1940’s so who really knows for sure what happened.

3. John Ruth (Kurt Russell) – The Hateful Eight: This was a very divisive movie. Personally, I loved it like I love all of Tarantino’s movies. Would not have complained if there were a few less racial slurs… Still, its a great movie that I think will become more appreciated with time. Kurt Russell gets a great death scene here, one that involves him puking blood in the face of Jennifer Jason Leigh who then gets her teeth punched out by Kurt Russell while laughing like an evil witch. What the fuck Quentin? Jennifer Jason Leigh definitely deserved the Oscar nomination for her performance here and I was really hoping she would win but that sexy robot from Ex Machina had to come and steal the Oscar away like she stole that red headed computer nerd’s heart.

2. Beaumont Livingston (Chris Tucker) – Jackie Brown: Jackie Brown is an underrated crime masterpiece and it has a killer cast. Robert De Niro, Sam Jackson, Pam Grier, Robert Forster, and even Birdman himself Michael Keaton. One of Jackie Brown’s many fine moments includes a short scene that introduces Chris Tucker into the movie, throws him in a trunk, and kills him off. It’s an amazing scene that only lasts a few minutes, but it’s funny and badass and it may be Chris Tucker’s best on screen performance of all time (Friday would be the only contender, maybe the first Rush Hour). Where is Chris Tucker anyway? Probably swimming around in the money Jackie Chan deserved to get for all those Rush Hour sequels. What the fuck Chris?

1. Calvin Candie (Leo) & Dr. King Shultz (Waltz) – Django Unchained: This one’s a tie because they happen right at the same time and one is caused by the other. It was fantarantinotastic to see Shultz take out Leo with his little wrist gun, then immensely tragic to see him go and at the same time frustrating as hell to know he totally screwed over Jamie Foxx and Kerry Washington. What the fuck Shultz?

Those are our Top 6 Tarantino Movie Deaths That Made You Say WTF! Let us know what Tarantino movie deaths made you say WTF and let us know if you disagree with the order of our list. Also let us know how you feel about Tarantino’s “self designated movie limit”. Thanks for reading…