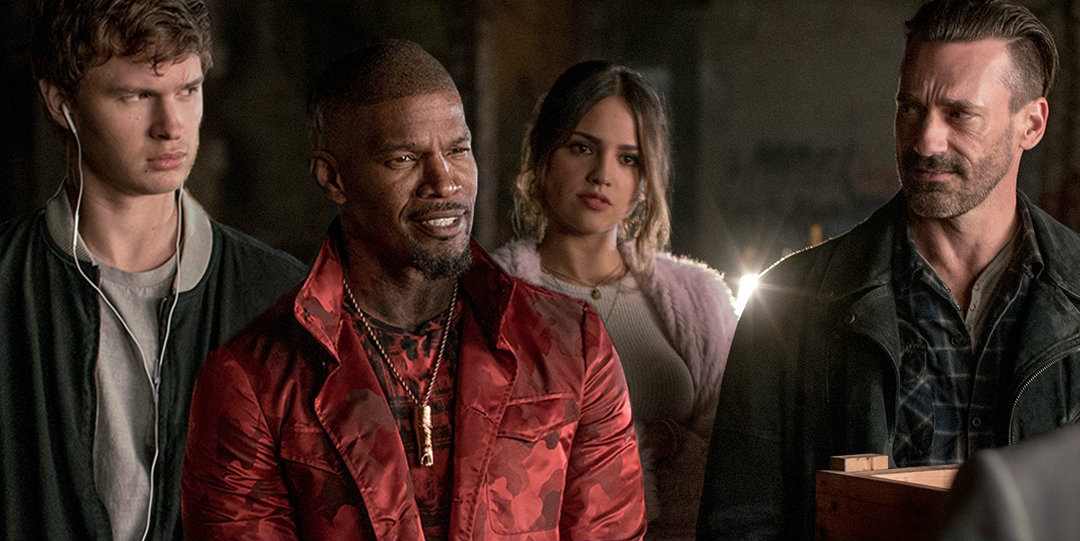 Everyone’s been raving about Edgar Wright’s highly anticipated Baby Driver, and after watching Baby Driver last night I have to say I whole heartedly agree with everyone. Baby Driver is a tense and hilarious full throttle movie, genuinely the best popcorn flick of the summer, and one of Edgar Wright’s best films since Shaun of the Dead. Packed with amazing actors and actresses, fantastically executed action sequences, and an amazing soundtrack that becomes part of the life of the film (much like the soundtrack to the first Guardians of the Galaxy), Baby Driver is a must a see. Baby Driver feels like a blend of many beloved masterpieces, like Drive, Heat, and La La Land all rolled into one (amongst other films), yet its like nothing I’ve ever seen before.

Baby Driver stars Ansel Elgort (from the Fault in Our Star which I definitely haven’t even seen once or even like a dozen times sobbing while eating a half gallon of sherbet to myself, ever) as Baby, a young music loving tinnitus sufferer who happens to drive like a Fast and Furious villain only he exists in a movie that doesn’t suck. Baby happens to moonlight as the getaway driver for a team of bank robbers lead by the furious whiteboard crime planning of Kevin “where you at Meechum??” Spacey. The “team” consists of Buddy, played by Jon “What do you think I want on my sandwich?” Hamm (in a role that would probably surprise his fans), and the “Bonny” to Buddy’s “Clyde” Darling, played by Eiza Gonzalez, there’s also Bats played by Jamie Foxx who we all know from the Oscar nominated film Held Up (pretty sure that was the Oscar nominated one), and Griff played by Jon “Shane-isher” Bernthal, and at one point even Flea shows up (spoiler alert).

Like countless protagonists before him Baby gets in way too deep with his crew, and while this is going on Baby starts to hit it off with the super cute super nice Debora played by Lily James, a waitress at the diner Baby frequents, but pretty soon some shits goes down and Baby’s gotta drive his ass off and he’s gotta take care of his baby. What separates Baby Driver from other movies like it is the lovability of its characters, even the bad ones, and its strong and beneficial love for music. Baby listens to music throughout the entire movie and it ends up blending with the film into a musically driven thrill ride. Everything in the movie synchronizes with the music, like a world with naturally existing choreography and I love it. The world reacts to the music and the music reacts to the world, Baby’s world that is.

Baby Driver is a near perfect thrill ride filled with action, laughs, and excitement. Ansel Elgort shines as Baby even when he’s surrounded by acting legends. The soundtrack is extremely memorable and I wouldn’t be surprised if it ended up selling like crazy. I love all of Edgar Wright’s movies, I’m a huge fan of the Cornetto Trilogy, and I like Scott Pilgrim more every time I watch it. After watching Baby Driver I’m not sure where to place it amongst his amazing roster of films, but it’s without a doubt in the top three, just not sure where exactly. This weekend make sure you see Baby Driver, even if you’ve never seen an Edgar Wright film you’re going to enjoy this movie.

Let us know what you thought about Baby Driver and where it ranks among Edgar Wright’s films, and thanks for reading…